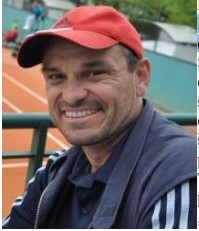 Dr. Martin G. Baroch (Dr. MGB), USPTA Elite Professional is the owner of the Martin Baroch Tennis Academy & Human Performance Center (MBTA & HPC), which he established in 1991. It was originally located in Prague in the Czech Republic (part of former Czechoslovakia), then moved to Leukerbad, Switzerland, in 1993. It is now (since 2002) based in Horgen, near the largest Swiss city of Zurich, which has also a major international airport (ZRH). Martin works besides motivated tennis players of all ages and coaches also with athletes from other sports, mainly Alpine skiing, and is active in the tennis and sports business consulting, player contracts and sponsorships, facility management and marketing consulting for tennis businesses. He is sharing some results of his vast research activities at cpta-tennis.org, which currently belongs to the most followed free global tennis education websites, as well as at his own social tennis network with educational features MyTennisWorld.net. Besides that he belongs to the frequent contributor in some Facebook tennis groups.

Martin has been a USPTA International Head Tester and a frequent speaker at USPTA conferences since the 90’s. He is a long-time member of the Czech Professional Tennis Association (CPTA), which he founded and has served as president (1992-95), vice president and director of education (1992-present). In 1992, Martin conducted first private education courses for tennis teaching professionals in Eastern Europe. He also holds Masters degree in Tennis coaching from Charles University in Prague (graduating as 1st in class of 1995), which is the highest coaching licence with the Czech Tennis Association (CTA). He is also a certified member of the Swiss Professional Tennis Association (SPTA), PTR & ICI and an honorary member of ape Tenis Espana. For years, Martin was involved as a member also with the Society of Tennis Medicine and Science (STMS), USTA and LTA.

Over the past more than 25 years, Martin has worked as coach or consultant with a number of top junior players as well as with ATP/WTA professional players from many countries. From the top 100 ATP/WTA players, he had significant involvements with Petr Korda, Martin Strelba, Sloane Stephens, Vania King, Eva Birnerova, Sandra Kleinova and Hana Sromova. His junior clients have won European Championships (Krejci, Birnerova) as well as national junior titles in the Czech Republic, Switzerland and Latvia. Besides that, he provided/provides non-disclosure consulting to the coaches of top professional players.

As a player, Martin competed in national tournaments in Czechoslovakia in the 1980s and has played in team tennis and local tournaments in Switzerland since 1993. He also took part in some Alpine skiing competitions.

Martin started teaching tennis when he was 17. “When I was a player, I enjoyed helping others (my sparing partners) get away from mistakes while practicing with them,” he says. “I was asked to say them more about this, and became a coach without even planning it.”

“I enjoy helping others achieve improvement in their games, and thus increase enjoyment and success in the game at any level, from beginner to professional.”

His areas of expertise are his efficient and body-friendly tennis techniques and in the comprehensive picture and services, which he provides to both players and coaches worldwide. His teaching system, ©Dynamic Total Body Tennis (©DTBT), brings principles of efficient professional tennis and fast progress to every level of the game. In his education courses for coaches, Martin provides easy-to-understand, logical explanations of all aspects of the game and challenges myths leading to limitation of players’ potential. He hopes to be able to share his education system with an ever-increasing number of coaches worldwide. So far Martin has conducted courses and seminars for coaches in many European countries and also in the USA, Mexico, China and Japan. USPTA has produced 3 DVDs from Martin’s seminars/courses conducted at USPTA World Conferences.

One of Martin’s favorite accomplishments is the movie he produced, “A Tennis Champion is Born”. During this project, he also “discovered” 12-year-old Andy Roddick and 16-year-old Tommy Haas and recognized their potential as future tennis stars. Outside of tennis, Martin is proud of having guided Swiss professional skier Karin Roten in 1995-96, who became under his guidance Vice-World Champion in Giant Slalom in 1996.

Martin plans to continue his involvement with CPTA and help it become an even bigger global organization. He also wants to help overcome some of the negative trends in tennis, such as misuse of the game for other goals, doping, not giving back to the game and uneducated coaches.

Martin has a medical degree (MD) from Charles University in Prague, Czech Republic (1990). Already in 1988, he graduated first in his class with a Czech Tennis Association (CTA) Coaches License from the Professional Coaching School of the CTA.

Outside of tennis, Martin enjoys skiing, traveling, photography, history and modern politics. His life mission statements are “Making Champions for Tennis & Life,” and “Tennis – Learning, Fun & Health” his motto is “Per aspera ad astra.” (On the way paved by stones to the stars.)